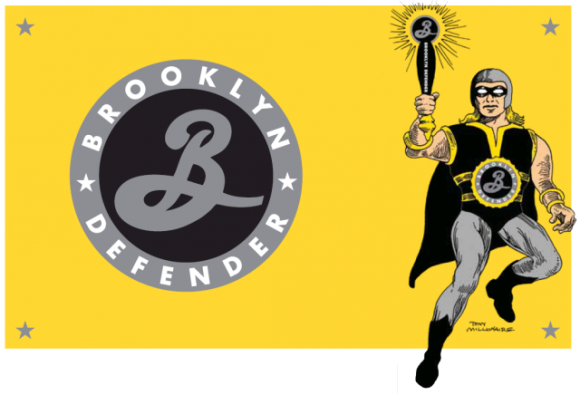 Brooklyn brewmaster Garrett Oliver brewed up The Defender, and the brewery worked with DC Comics designer Milton Glaser, who came up with the beer’s logo, and cartoonist Tony Millionaire, who drew up the superhero you see above.

Unfortunately, the brew will only be available in a handful of bars in Brooklyn and Manhattan, but I guess that makes sense; it was brewed specifically for New York Comic Con after all.

In general, I’m a fan of superhero-themed brews, though I’m not sure why. I’m not really a comic-book kind of guy. I’m particularly partial to Clown Shoes’ Supa Hero IPA. 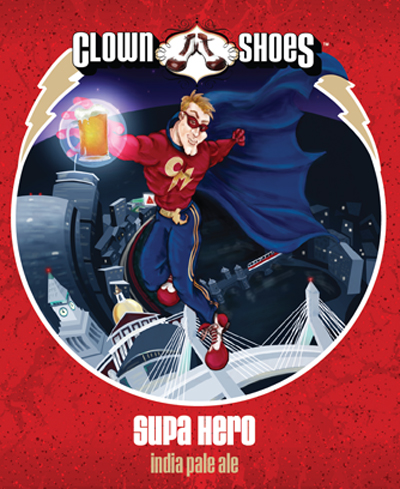 If you’ll be in Brooklyn next week and want to attend the launch party, you should send an RSVP here.

Here’s the full (super-nerdy) back-story on The Defender superhero, from The Brooklyn Brewery:

“Once, a long time ago, benevolent Beer Gods bestrode the lands of the world, bringing wonderful beer and great happiness to the People. Collaborating joyously among themselves, the Beer Gods defended the pleasures of the table and promulgated the virtues of Flavor, Variety, Deliciousness, Versatility and Honesty in beer. And the People loved them for it.

“But the Beer Gods were far too trusting – in truth, they were not without enemies. Out of the stygian depths of the Earth’s crust rose a cabal of anti-Beer Gods, the Megaliths. Taking the peaceful Beer Gods by surprise, the warlike Megaliths cast a powerful spell that drove the Beer Gods down into the shadows. Flavorful beer vanished from the land, and the People wept. Their victory complete, the Megaliths sent among us the ghostly pale, thin tasteless beers known colloquially as “foam jobs”. Blandness led to mediocrity, mediocrity led to hate, and hate led to suffering. And O, how the People suffered! They forgot the true taste of beer, the soft rustle of barley, the smell of hops.

“And then, just as it seemed that the darkness had stamped out all good things, a new dawn rose over Brooklyn. A hero came to rescue the people from the iron grip of the Megaliths – The Defender! Spawned in deepest Brooklyn and robed in a cowl of shimmering amber, the Defender wielded the rich power of caramel malts, the sharpest unbreakable blade of pure hop bitterness and an incredible focused blast of hop aroma to shatter the Megalith’s spell. The Beer Gods awoke to find themselves forever shielded within the hearts of the People, and once again the great virtues of true beer spread through the land. Even now, the Defender will be a light to you in dark places, when all other lights go out. Should your shadow ever grow long, your spirit sag, and your knees buckle, you need only remember these words — BRING FORTH THE DEFENDER!”