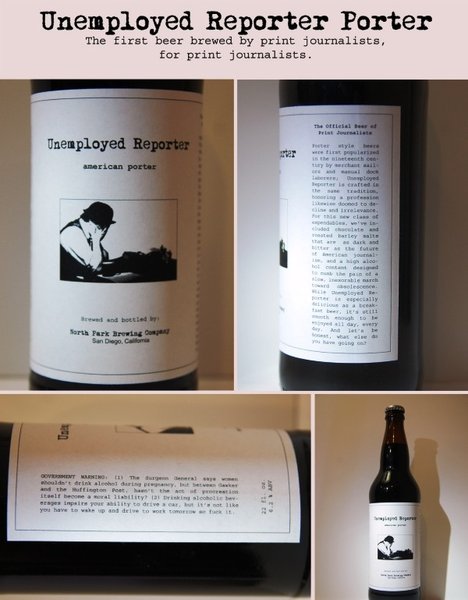 I’ve worked in the Wonderful World o’ Journalism for nearly a decade. To say these are dark days for print journalism is a gross understatement.

I’ve seen countless friends and even loved ones those their journalism jobs during the past years, as publishing companies dropped employees like amateur drunks drop pint glasses in the wee hours of the night. I’ve watched incredibly talented writers and reporters leave the industry after decades of hard work because they couldn’t make the transition to online or because they could no longer pay their bills with reduced salaries. And to be honest, the situation is not all that much better for Web journalists.

Journalism is a largely thankless craft these days, and it can require a lot of levity to keep on clacking those keys. There’s a lot of self-deprecating, gallows humor in today’s editorial offices, at least in my experience. So I got a real kick out of Jon Campbell’s homebrewed Unemployed Reporter Porter.

Campbell, a reporter a with sense of humor and an apparent chip on his shoulder, reportedly brewed the beer along with San-Diego-Based North Park Beer Co. and crafted a rather amusing label for his Unemployed Reporter Porter.

From the Unemployed Reporter Porter label:

“Porter style beers were first popularized in the nineteenth century by merchant sailors and manual dock laborers. Unemployed Reporter is crafted in the same tradition, honoring a profession likewise doomed to decline and irrelevance….[W]e’ve included chocolate and roasted barley malts that are as dark and bitter as the future of American journalism, and a high alcohol content designed to numb the pain of a slow, inexorable march toward obsolescence. While Unemployed Reporter is especially delicious as a breakfast beer, it’s still smooth enough to be enjoyed all day, every day. And let’s be honest: what else do you have going on?”

Campbell even tweaked the government warning that appears on beer bottles in the United States:

“(1) The Surgeon General says women shouldn’t drink alcohol during pregnancy, but between Gawker and the Huffington Post, hasn’t the act of procreation itself become a moral liability? (2) Drinking alcoholic beverages impairs your ability to drive a car, but it’s not like you have to wake up and drive to work tomorrow so fuck it.”

It’s unclear if Campbell or North Park will ever sell this beer or not—or if this whole thing is just a joke—but if they do, and I can find it,  I’ll certainly buy a few bottles.