Buying Belgian Beer Online and Shipping It to the US 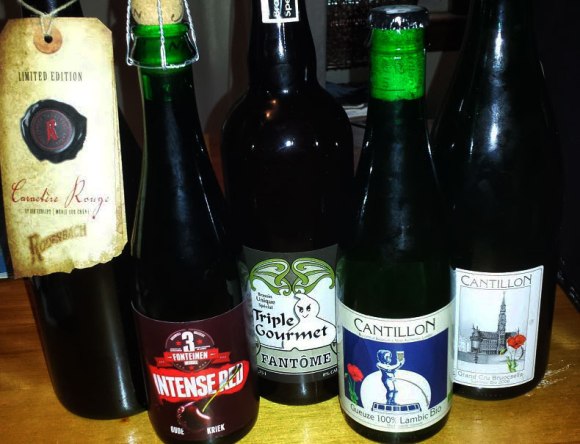 A few of the beers I purchased from BelgiumInABox.com and EtreGourmet

Being the Urban Beer Nerd that I am, I’m always on the lookout for rare, hard-to-find, unique and limited-release brews. Many of my favorite breweries are located in Belgium and elsewhere overseas. Often these breweries’ most unique beers are released in very limited quantities, and the brews that do make it to America are often difficult to locate and/or very expensive.

So a few months ago, I started researching ways to buy my own Belgian beer online and then ship it to Boston, where I can sit in the comfort of my own home with the rare beer of my choice. I was sick of only being able to drink Cantillon beers a few times a year and paying an arm and a liver for bottles when I could find them.

I came up with the following two websites, which I’ve since ordered from at least three times each and had no problems: BelgiumInABox.com and EtreGourmet (BieresGourmet.be).

Before I go on, a warning seems appropriate: When you order beer online, you do so at your own risk. Depending on where you live, it may not “legal” in the strictest sense of the word to buy beer online from an international retailer to ship to your locale. And in many cases, shipping companies will not accept and deliver packages with beer in them.

Now that that’s out of the way, I’ll say that personally, I have not had any issues ordering beer from BelgiumInABox.com or EtreGourmet. And when the sites declared the contents of my boxes of beer, as is required by Customs, they usually wrote something like “lambic glassware” or “collectible bottles,” which was technically true because I usually bought glassware in addition to beer.

Anyway, both of these sites offer reasonable prices on beer from my favorite Belgian breweries, including Cantillon, Drie Fonteinen, Fantome, Rodenbach, Tilquin and Blaugies. Shipping is expensive, but it’s not too much more than the markup you’d pay for a rare bottle at a beer bar or through a retailer. For example, the last time I ordered from BelgiumInABox.com, I purchased a 750ml bottle of Cantillon’s 2013 Kriek Lambic Bio (about $13), a 750ml bottle of 2012 Fantome Saison (about $9) and a 3 Fonteinen gueuze glass (about $16) for a total of roughly $38, and the shipping cost around $43.

The shipping is expensive, but I’ve been willing to pay it for beers I would not otherwise be able to find in the United States. I feel confident my payment card information is secure, because BelgiumInaBox uses Ogone for payment processing, a well-known and trusted Europe payment processing service, and EtreGourment accepts PayPal. And both sites have HTTP Secure Web pages for payments.

My packages of beer arrived in great shape, and overall, I’m very pleased with the experience with both BelgiumInABox.com and EtreGourmet. Another site that’s been recommended to me is BeerPlanet.eu, but I’ve heard rumors about some of the site’s shipments being held up in customs, so I never ordered from them.

I probably shouldn’t even be writing this post, because it may draw unwanted attention to these sites and services, but fuck it. A post like this would have been helpful to me when I was trying to fine reputable sites to order from, so I wanted to share my experiences.

I must admit, I’m excited about this review. I’m excited because I’ve had Brasserie Fantôme’s Extra Sour Special Original Creation once before, and it’s a one of a kind saison. In fact, I’d say it’s one of the top five brews I’ve had this year—and the Urban Beer Nerd drinks a lot of different kinds of great beer. (I drink so much good beer that I can refer to myself in the third person when describing my craft beer consumption.)

Here’s why I love it so much. I love quality saisons, and I love sour beers. And Fantôme Extra Sour is one of best saisons and one of the best sours I’ve ever tasted.

Fantôme Brewery is a small specialty brewer located in the small town of Soy, Wallonia, Belgium, that produces only saisons. The Fantôme brewing facility is so small that it can only produce tiny batches of beer, and as such, its saisons, especially it’s “Special Creations,” or limited production can be difficult to find and very expensive.

The packaging is simple yet elegant with just two small labels at the bottle’s base and a thin-paper ribbon over the bottle cap. To open the dark-green bottle you first must remove the paper, pop a bottle cap and then pull the cork using a tradition wine corkscrew, which is the case with all Fantôme’s “bomber” bottles. I poured the golden-honey potion into a large tulip glass and it settled nicely with a frothy cuttlebone-colored head. You can smell the sweet-sour tang as soon as you put your nose close to the brew, along with the funky Belgian yeast.

Fantôme Extra Sour taste like a smooth, fresh saison at first but it finishes with a mouth-puckering-but not-too-acidic sour bang. It’s a big beer with a 10% ABV, and the sour funkiness mostly kills the alcohol taste. But it does leave a mild burn and you feel it after a few large sips.

Of my favorite sour styles is the barrel-aged Flanders red ale, and though Fantôme Extra Sour is very different than the popular Flanders ales such as Rodenbach, it has a similar barrel-tang that really combines nicely with the saison style.

Fantôme’s Extra Sour “Speciale” is the second is limited series of Special Creations from the brewery, and as mentioned above, it’s extremely rare and expensive. My “bomber” bottle (1 pint, 9.4 fluid ounces) cost $32. As much as I love saison, that’s a lot of money for beer. If you see a Fantôme Extra Sour for sale, I recommend purchasing it and saving it for a special occasion.  Good luck finding it, though.

This sour saison gets a 9/10 on the Urban Beer Nerd scale. (BeerAdvocate.com readers rated Fantôme Extra Sour at 4.85/5, though only four readers submitted ratings at the time of this post.)