Untappd Beer App Will Be Ready for BlackBerry 10 Launch 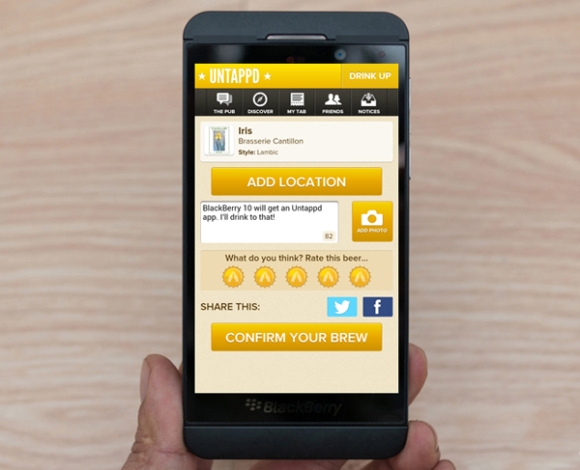 If you read this blog, you know I’m a beer nerd. What you might not know is that I’m also a tech nerd; I love gadgets of all shapes and sizes, and I’m particularly partial to smartphones and tablets. I own and use a number of different phones and slates, including Android phones, BlackBerrys and an iPhone.

Despite the rapidly shrinking popularity of Research In Motion (RIM) and the BlackBerry, I still carry one regularly, because I love the QWERTY keyboard. The BlackBerry software however, is another story. It’s clunky, slow and embarrassingly outdated at this point. So I’m anxiously awaiting the release of RIM’s brand new mobile platform, BlackBerry 10, which is set to launch on January 30, 2013.

Earlier this week, I posted about Untappd, a social drinking app that lets you “check in” the various beers you drink, share checkins with other drinkers, earn prizes and badges, and much more. Native Untappd apps are available for Google Android and Apple iOS devices, but BlackBerry users have had to use a Web-based “app” to access Untappd in the past, which limited its feature set. For example, BlackBerry users can’t include photos of their brews with checkins.

But that’s about to change with the launch of BlackBerry 10. I just spoke with Untappd co-founder Greg Avola, and he informed me that he and his partner in crime Tim Mather are porting over their Untappd iOS app to BlackBerry 10. “It will have the same features as iOS and Android,” Avola said. It will be available just as soon as the first BlackBerry 10 device is released, if everything goes as planned.