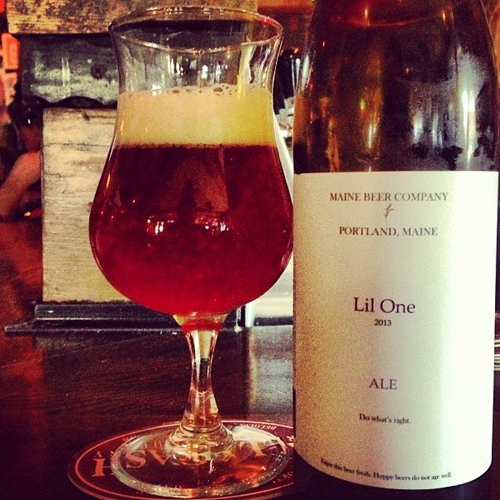 UPDATE: I added Maine Beer Company’s official description of the beer below. (In bold.)

Regular readers of this blog know I’m a big fan of Maine Beer Co. I have never had a Maine Beer brew that I did not thoroughly enjoy.

So I’m psyched to see that the brewer released a new brew, Lil One ale. I don’t have too much information on this one yet, and Maine Beer Co.’s website is down as I write this. But I reached out to the company via Twitter requesting specifics, and I will update this post if I get any more details worth sharing.

All I know right now is that Lil One is a rather “big” beer with 9.1% ABV, making it Maine’s highest-alcohol beer to date, not counting any limited releases I may not be aware of. I also know that I will be purchasing a couple of bottles of Maine Beer Co. Lil One ale as soon as possible. Lil One should hit beer-store shelves soon. (I’m also anxiously awaiting the release of Maine Beer’s “Dinner” double IPA.)

“Some may call this a malty double IPA, some a hoppy barley wine.  We prefer that it not be classified.  We think of it, simply, as our strong winter ale.  Intense hop aromatics and flavor (think pine, candied orange) blended with just enough malt sweetness to balance out the palate.

One thought on “Maine Beer Company’s New Lil One Ale”