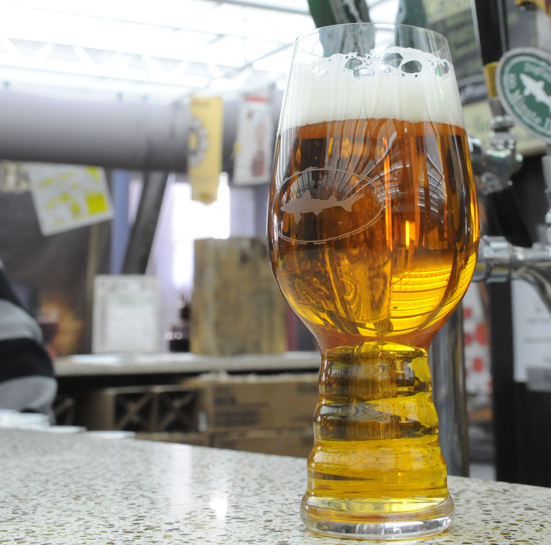 A couple of weeks ago, I told you about Dogfish Head Craft Brewery’s A Hop Eclipse Now promotion, as part of which it will release two new IPAs and a fancy new beer glass. Today the brewer took the wraps off the glass, which is made by German-glass manufacturer Spiegelau, and it’s calling the glass “a new standard for IPA glassware.”

Dogfish apparently worked along with Sierra Nevada Brewing Co. on the glass design.

“I’ve been a longtime believer in the importance of using quality glassware to enhance the enjoyment of quality craft beer,” says Dogfish Head Founder and President Sam Calagione. “The process of collaborating on the design of this hop-centric glass takes this concept to the next level.”

“Calagione, his wife, Mariah, and Sierra Nevada’s father-son team of Ken and Brian Grossman worked hand-in-hand with Spiegelau to bring this glass to life. Through a series of design and tasting sessions, the team created a glass with:

The glasses are available now online for $9 each at Dogfish.com and at the brewer’s Delaware brewpub. I’m a huge fan of all three parties involved. I own a set of Spiegelau Beer Connoisseur glasses, and I love them.  And I already ordered a pair of these new glasses.  To be honest, they’re kind of awkward and ugly looking. But I’m a beer-glass nerd on top of being a regular beer nerd, and I these new glasses will be a nice addition to my glassware collection. Can’t wait to fill ’em up with some Rhizing Bines IPA.