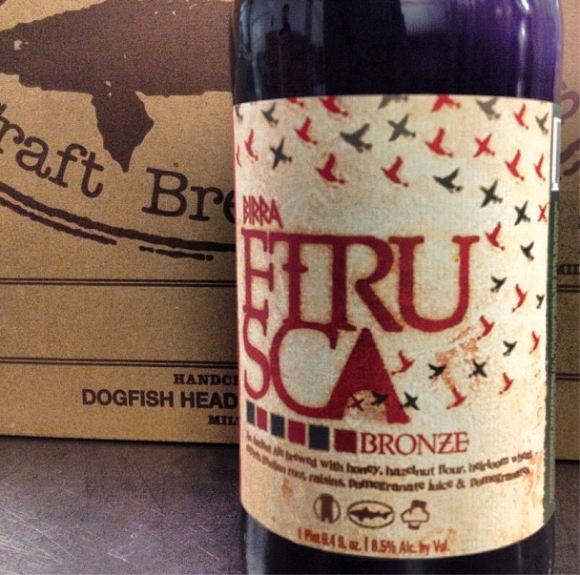 Dogfish Head on Friday announced via Twitter that the latest beer in its Ancient Ales series, called Etrusca, is currently being bottled, and it will hit beer-store shelves in December.

The idea behind Dogfish’s Ancient Ales is to recreate lost styles of beer from ancient times, using recipes and ingredients that are close as possible to those originally used by their brewers.

Here’s a description of the new, 8.5% ABV brew, from Dogfish:

“This Ancient Ale proves that beside the wine on every Italian’s dinner table, there should also be a place for beer.

“The backbone of Birra Etrusca comes from two-row malted barley and an heirloom Italian wheat. Specialty ingredients include hazelnut flour, pomegranates, Italian chestnut honey, Delaware wildflower honey and clover honey. A handful of whole-flower hops are added, but the bulk of the bitterness comes from gentian root and the sarsaparilla-like Ethiopian myrrh resin.

“Birra del Borgo and Baladin also will brew a version of Birra Etrusca, and to add complexity and variety, each brewery will ferment its batches with different traditional materials. Dogfish will use bronze, Baladin will use wood, and Birra del Borgo will use terra cotta.”

I appreciate what Dogfish Founder Sam Calagione and his “beer archiologist” buddy Dr. Pat McGovern are trying to do with these Ancient Ales, and I love how Dogfish is always experimenting with new beers and ingredients. (Beer Advocate magazine recently mocked Calagione and McGovern in an amusing comic strip.)