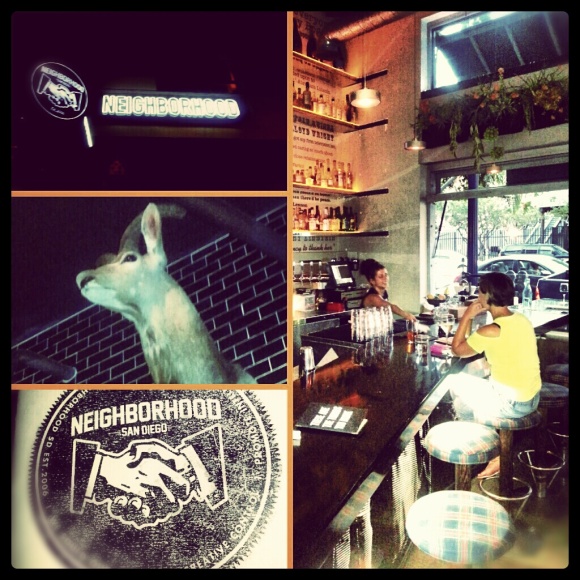 Today I arrived in San Diego to cover a (non-beer-related) conference, and the first thing I did was seek out some decent beer bars within walking distance of my hotel. I hit a few duds first, but I eventually found Neighborhood. The bar also serves wine and cocktails, so it’s not really a straight beer bar, per se. But the beers it does serve, on tap and in bottles and cans, are clearly selected with love.

Neighborhood is located in downtown San Diego’s East Village, just east of the city’s Gaslamp Quarter, and it’s a solid beer nerd hangout. It has around 30 draft beers on at any given time and between 30 and 40 bottles. (Neighborhood had Pliny the Elder on tap today, which definitely didn’t hurt.) My bartender was friendly and unpretentious, if a bit stereotypically hipsterish. And she was knowledgeable and helpful when I asked for recommendations. The food is unique, upscale pub grub. And the décor and atmosphere both get thumbs-up from me. (Neighborhood also apparently has a secret “speak easy” called Noble Experiment with an entrance near the restrooms that’s hidden with beer kegs, but I didn’t actually see it.)

If you’re in San Diego’s East Village or Gaslamp Quarter and you’re seeking a unique craft brew, you could definitely do worse than Neighborhood.

One thought on “Barfly’s View: Neighborhood in San Diego, CA”