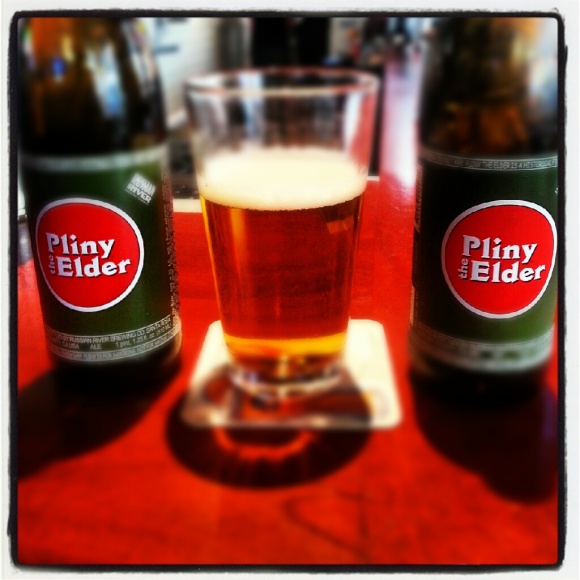 The double IPA from Sonoma County, California’s Russian River Brewing Company is easily one of the best and most complex IPAs ever made. And it’s extremely difficult to find, especially outside of northern California.

Whenever I’m in the Bay Area, I make it a point to track down Pliny. And I usually find it in the strangest places; it’s never in the beer bars I visit, and in the bars that do normally have it, the keg was just kicked or something. I found today’s bottles in a weird little wing joint that was featured on The Travel Channel’s Man v Food, called SmokeEaters. (My Plinys—yes, I had two, I had to—were bottled less than a month ago, and they were super fresh.) When I was in San Francisco earlier this summer I found Pliny on draft at a sports bar near Union Square, the 4th Street Bar & Grill.

But it really doesn’t matter where you drink it, Pliny the Elder never disappoints.

“Pliny the Elder, born in 23 AD, was a Roman naturalist, scholar, historian, traveler, officer and writer. Pliny and his contemporaries created the original botanical name for hops, ‘Lupus Salictarius,’ meaning ‘wolf among scrubs.’ Hop vines at that time grew wild among willows, likened to wolves roaming wild in the forest. Pliny the Elder died in 79 AD while saving people during the eruption of Mount Vesuvius. He was immortalized by his nephew, Pliny the Younger, who continued his uncle’s legacy by documenting much of what his uncle experienced during the eruption of Mount Vesuvius. This beer is an homage to the man who discovered hops and perished while being a humanitarian. “

8 thoughts on “I Haz Pliny, Motherfuckers”